Education Minister Dharmendra Pradhan launched the ‘Nadi ko Jano’ app during an online webinar organized by the Bharatiya Shikshan Mandal on the occasion of Vyaas Pooja Mahotsav on Sunday.

As per a release, the ‘Vyaas Pooja Mahotsav’ webinar was hosted by Dr. Sachidananda Joshi, President, Bharatiya Shikshan Mandal, to shed light on the role of Bhartiya ethos and teachers in the implementation of New Education Policy. Speaking on the occasion, Education Minister said that nature is the first teacher of man and the role of the teacher is paramount in Indian society.

“Indians have survived for thousands of years because of the Indian tradition of imparting knowledge to future generations,’ Dharmendra Pradhan said.

“Things are changing rapidly in this tech-enabled world. Science is changing the world how we see it. But the basis of these scientific innovations is the self-awareness that resides within us,” Pradhan said.

He added that intellectual property is the biggest asset of Bharat. “Today, as the country is entering a new era, the new education policy, science, technology, creative thinking, logical decision making, and innovation will help Bharat to become a knowledge economy,” he said.

As per the release, the purpose of the app is to gather information about rivers across India. The initiative is a part of research for the Resurrection Foundation with the aim of creating a database on Indian rivers.

“The application will collect geographical local, water level, and pollution level of the rivers. Any student for Indian can upload the information,” the release said.

CBSE will announce exam schedule for class 10, 12 on Feb 2

CBSE will announce exam schedule for class 10, 12 on Feb 2 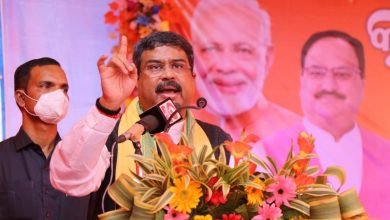