The horrors of the Afghanistan crisis have raised questions on human rights violations. Civilians are struck inside the country and few lucky ones could leave the ghettos of masculine moderation of Sharia law. One such lucky fellow has decided to put her story on social media to scream out loud about the violations and practically unlivable conditions.

The airports and their outskirts are filled with people. The desperate mother of an infant Elena posts the dilapidated survival conditions of people waiting to be evacuated in the airport. After 5 days of waiting at the airport, the US native has reached Bahrain safe with her family followed by Biden’s decision to include 18 civilian aircraft from private players to evacuate people within the deadline.

Earlier, images of ransacked Kabul Airport went viral across the globe as it witnesses a massive exodus of civilians and foreign nationals stuck in Talibani Afghanistan. The mother whose Instagram handle reads @zf326 shared that they are stuck there for around 5 days. This picture shows desperate conditions where she has put her infant in a suitcase to protect her from cold.

Her six-month-old daughter is freezing in the cold and no one is there to provide a cover or a blanket. They were constantly told, “We’re keeping you safe.” Afghanistan has severe temperature fluctuations and becomes cold at night from scorching heat in the morning. According to social media posts by stranded people, there is not even a shade in the airport.

There is not enough drinking water for around 4,000 stranded people who are waiting for their turn to board the plane and flee. They are dependent on the soldiers for food and other essential supplies including drinking water.

People are staying there in the cold and open. The American camps are overcrowded and soldiers are doing the best they can do with little support from the top brass.

The stranded civilians are relying on stones or makeshift arrangements with cardboard and papers. The sudden mass exodus has jeopardized the situation in the American camps. Amid the series of posts, the innocent eyes of toddlers and kids playing in the vicinity raise questions about their future and innocence. It seems that these photos echo the saying, ‘bombs and bullets can’t kill innocence.’

Apart from that, there is no water to wash hands in Kabul Airport. Drinking water is limited but people are using them to wash their hands to maintain basic hygiene.

Most importantly, packets of pork sausages were distributed to the people who are mostly Muslims. Though Islam forbids pork, people are eating it as the majority of them can’t read English. Another possibility is that they are hungry for days now.

The innocent eyes of Elena are happy to reach Bahrain from Kabul after waiting at Kabul Airport for more than four days. But she is still puzzled about the fast-changing situations in Afghanistan.

Elena’s mother finally has shared a relieving picture of them boarding an American private plane from Bahrain for the US. 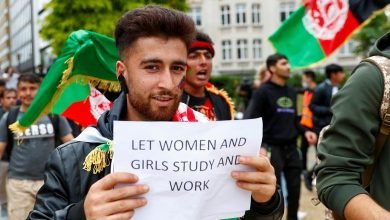 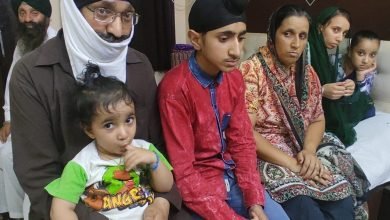